What a great piece on the dysfunctionality of online advertising at the now-defunct The Correspondent, âThe new dot com bubble is here: itâs called online advertisingâ [2019] by Jesse Frederik and Maurits Martijn.

Picture this. Luigiâs Pizzeria hires three teenagers to hand out coupons to passersby. After a few weeks of flyering, one of the three turns out to be a marketing genius. Customers keep showing up with coupons distributed by this particular kid. The other two canât make any sense of it: how does he do it? When they ask him, he explains: “I stand in the waiting area of the pizzeria.”

Want to close all open tabs so you can start fresh with Tab Groups? Press and hold the Done text label to reveal the secret option. Why Apple hid it there is baffling, and thereâs zero indication that âDoneâ would have any secondary function.

I wanted a way in Apple Mail to list all emails from VIPs to which I’ve not yet replied. After googling, I found a nice solution at MakeUseOf: â4 Mac Mail Productivity Tips All Professionals Must Knowâ (2019).

So I made a Smart Mailbox “VIP Unreplied” with all the following rules:

And in the “Already Replied” Smart Mailbox:

This second one because sometimes a message is handled in some other way than a reply or doesn’t need one.

I think the author’s almost actually serious in his call to ditch HTML for PDF:

PDFs are page-oriented. This is another fundamental freedom â toknow unambiguously which part of the document you are looking at.Compare to infinite-scroll HTML pages which are disorienting bydesign. This may sound trivial, but seriously: with infinite scrolling,you are fundamentally not in control of the reading experience.

Ha, since he posted the mainfesto as an actual PDF, when I copied that quote it pasted full of triple-spaces and some non-spaces, which I’ve kept for effect â so much for that! Still, the author does bring up many important issues.

Back in February 2009, Christian Schools of Florida put their Master In-Service Program — which handles ongoing teacher training — on their web site. But we left for later the report required by the state Department of Education summarizing points accrued for each component. That report is now up and running. 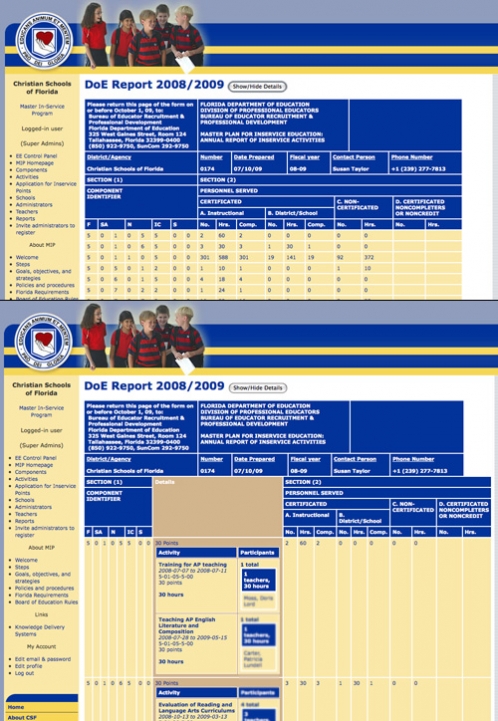 The Christian Schools of Florida’s Master In-Service Program manages the activities undertaken by its members to be re-certified as educators. Each in-service activity qualifies for credit towards a component set by the Florida State Department of Education. The new report summarizes the various types of participants — teachers, administrators and non-certificated people — who gain credit towards each component.

In previous years the report was compiled manually. This year however, since all participants in all activities are now entered into CSF’s MIP web system by individual school in-service administrators, the report is simply a print-out of a web page on the CSF site that’s a precise replica of the handwritten paper report. With over 500 teachers participating in almost 100 activities this year, the automatically-generated report has saved a lot of tedious, repetitive and error-prone manual calculations.

The report has two views: a summary, which is sent to the DoE, and the full details view, which drills down to the level of individual participants and shows how the summary’s totals are calculated. The report also generates warnings, such as when an activity has been assigned more hours than its component’s maximum.

The totals are not stored on the server, but instead are calculated each time the page is loaded. Some of this is done client-side using Javascript with the Numeric and Calculation jQuery plugins.

“Thank you for your good work,” CSF president Ken Wackes emailed at the conclusion of the job. “We are greatly satisfied.”