Backstage at the new US Sports Camps web site

iPhone 12 Pro Cinematic 4K: New York by Andy To. Make sure to watch at full resolution.

There are many utilities for macOS window management (looks like the most hackable and maybe powerful is Jigish Patel’s Slate) but what I personally rely on is a combination of TotalSpaces2 to keep the Spaces functionality that came and I think went with OS X Leopard; SizeUp for the snap functionality most easily found elsewhere (Moom, Spectacle, Cinch, Divvy, Amethyst); and Zooom/2 for moving and resizing windows and toggling sloppy focus, which I’ve not found anywhere else.

The above link to Zooom/2 is not however to its homepage but to a disk image I just posted because Zooom/2 is no longer available, as I realized when setting up a new Mac. You’re welcome.

MacWorld’s list of all the Apple Arcade games that support controllers.

I feel similarly regarding the homepage banners at Node.js (â#BlackLivesMatterâ) and Linode (âBlack Lives Matter. Linode is committed to social justice and equality.â), both of which I rely on for my work. There are substitutes for Linode, but none for Node.

Coincidentally, I’m currently facing this issue myself: âChanges to SameSite Cookie Behavior â A Call to Action for Web Developersâ by Mike Conca at Mozilla’s blog.

In wake of Phil Schiller’s ascent, Cult of Mac lists all the Apple Fellows.

The Smithsonian posts a nice little piece on Frank Lloyd Wright’s Laurent House, designed for the wheelchair-bound client who clearly adored his wonderful home, which is now thankfully a museum.

Oh my goodness, it’s 2020 and I’ve been working with CSS for pretty much as long as it’s existed and I just learned that z-index does not work unless a position value is declared!

Sponsored by Nike, US Sports Camps is a fabulous, accessible nationwide directory of sports camps for adults, teenagers and children. 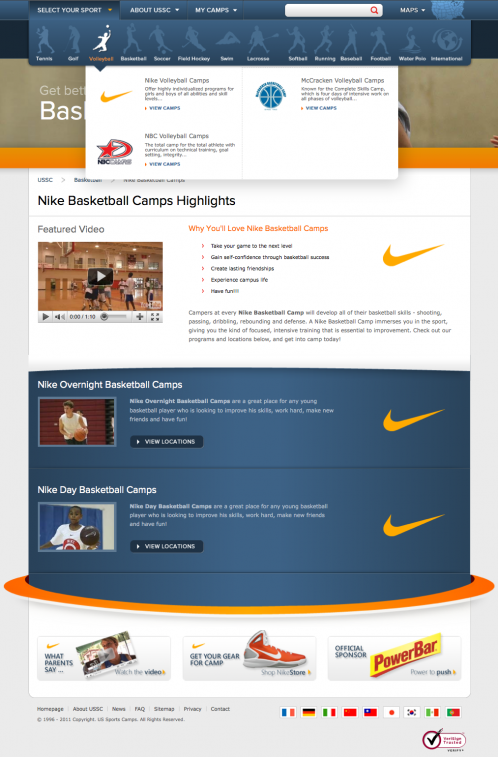 A page at the US Sports Camps site

Colorado-based OptiSite won the tender to redesign ussportscamps.com and migrate it from an ASP-based content management system to ExpressionEngine. As the data structure and screen output grew in complexity, OptiSite’s development partner, Vancouver-based vibe9design.com, contacted Engaging to assist with the EE backend.

The first challenge was to display a sport’s camps grouped by sponsor, program, type, region and city. The difficulty was the disconnect between the organizational channels (sports, sponsors, programs and camp types) and the geographic ones (regions, cities). To get our set of camps, we looped through each program as determined by the sport and sponsor, then through each resulting camp’s type. But how then to display the selected camps by region and city?

By filtered loops. First, we got the set of all our selected camps’ regions and cities, then looped through the regions, displaying for each region any of its cities also found in our set of cities, then within each of these cities any of its camps in our camps set.

It worked, but was altogether a bit crazy, as we’d discover later.

Another challenge was that the SEO-dictated URL structure for this particular site goes against the natural EE grain; instead of a URL’s segment #1 being the content type and segment #2 the particular content item, here segment #1 is the sport, #2 the sponsor, and #3 a particular camp, region or camp type. And if the camp in segment #3 does not belong to the sport in segment #1 and the sponsor in segment #2, then for SEO reasons the page redirects to the camp’s correct and only URL.

We achieved this URL structure by serving all pages from a single main site/index template that springs off conditionally to various embedded templates.

But this too created a major problem, as we’d also discover later.

Update 2011 Dec 27: Writing some 9 months later, after having worked with Structure, it’s clear that this impressive add-on would probably have been perfect for the URL challenge posed by this site.

The site has hundreds of legacy URLs to redirect to their new, SEO-friendly replacements. We automated many of these by having templates parse their URL query strings to derive and do the redirects. For the remainder we set up a Redirects channel.

Therefore the first thing that the site/index template does is check against all the entries in the Redirects channel. Only if there are no results does it proceed to serve a page, otherwise it redirects to a URL specified in a Redirects channel field.

Bill Blitz of OptiSite, pleasantly surprised that automated redirects could even be done, calls the setup “a thing of great beauty.”

So what were the horrors that we came to discover? That some of this functionality comes at a deadly price: performance. Firstly, the server was overloaded by the many loops within loops required to display the camps by region and city within sport, sponsor, program and camp type. Derek Jones, EllisLab’s CTO, stepped in here, insisting that the efficiency simply had to somehow be improved. Secondly, the single template that enabled SEO-determined URLs violated EE’s template caching method, resulting in uncached complex pages that could take up to 20 seconds to load.

We solved the server load problem by changing our display method from filtered loops to extended objects; instead of gathering all the pertinent camps’ regions and cities and doing the loops and filters as described above, we extended the initial set of camps to contain their regions and cities and be sorted by them. This was achieved with a single SQL query, rather than the crazy 200 or so generated by the filtered loops method.

We then regained template caching by creating templates for each of the first and second segments in URLs, ie, the various sports and sponsors (which fortunately at this site are reasonably static and few in number). The content of these templates is all identical — each simply points back to the site/index template — but they serve as hooks on which to hang template caches. Thus fully reinstated, template caching enables pages to load almost instantly.

All this smooth backend functionality is however merely handmaiden to the exciting interface produced by OptiSite and Vibe9 Design — furthermore it’s only one part of this extensive site, which also features maps and a registration system. You can read more about the site at Vibe9 Design and view its Show-EE page. Thank you Derek for your pointers, Bill for being such a great guy to work for, and Terry for late-night Skyping and bringing Engaging aboard to help you revitalize this national treasure.