his one was a labor of love. It’s not the first web site marked Made with Engaging for my painter friend Juan Carlos Bronstein; back in the ’90s we collaborated on version 1, also with a dark background, also with some care about the typography.

But back then web fonts didn’t exist so we made the section titles with graphics instead, animating them with what we hoped was some Pink Panther-esque humor. Here are the Bath, Bed, Jug and Sandra title gifs:

Yes, I had a lot of affection for that site, and was saddened when a couple of years later Juan decided to redo the site on his own, learning the requisite HTML and CSS.

This second version of the site was altogether more sober — Mr Bronstein even eschewed the brief juan.net domain for the more grown-up juancarlosbronstein.com (the precursor to this sobriety was that he’d already replaced the animated titles on v1). Here’s v2: So I was pleased when he asked me back to work with him again on a third iteration. We’ve kept v3 simple so far, with a splash screen featuring one recent painting, another screen displaying all his works, a third for his schedule, and a fourth to contact him. 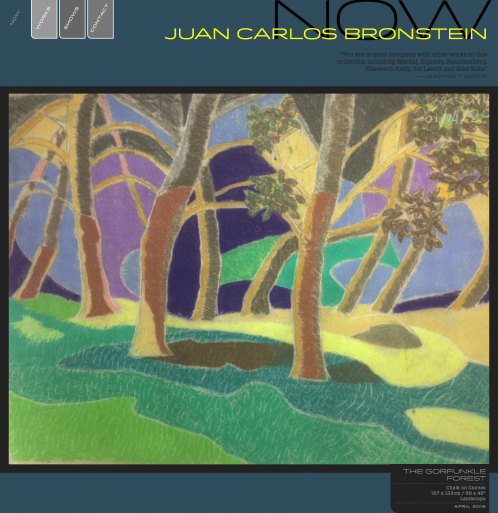 The homepage at juancarlosbronstein.com, entitled "Now"

The Works screen is filterable by technique and year [Update 2019 Oct 6: No longer â Juan Carlos wants to keep it all very simple]. Thumbnail images are displayed to scale, and any that are too small to see expand when hovered. The site is currently desktop-only, but is responsive within that limited range, with the works page expanding to fill the screen’s width and each painting on its own dedicated page expanding vertically to fill the screen. [Update 2017 May 17: Now responsive, see “Making responsive a painterâs site”.

We utilized some modern browser functionality, such as rotated text. We went with a theme of rectangular boxes with a single rounded corner to be a little distinctive. And since this is Engaging.net the site runs on ExpressionEngine.

The background remains dark â though not quite totally black this time â while the fonts are now Hoefler & Co’s sporty Vitesse in the body and adventurous Idlewild for the titles in the hope that the panther is still pink.