n Florida, the Department of Education delegates teacher re-certification for each district or grouping of schools by means of a Master Inservice Plan. A while back, Engaging helped Christian Schools of Florida bring their MIP onto the web, saving the organization much clerical work. But CSF is not the only organization in the state that handles MIP for a number of schools, nor is it the largest.

MIP Director Susan Taylor told Dr Barbara Hodges, President of the Tampa-based Florida Council of Independent Schools, of CSF’s new web-based system, and Dr Hodges realized that FCIS could also benefit from such a system—moreover, while CSF has around 30 member schools, FCIS has around 160, so it could save them even more work. In coordination with CSF, Dr Hodges assigned Keara Danger, FCIS’s Director of Business and Operations, to work with Engaging to set up and adapt the system for FCIS. 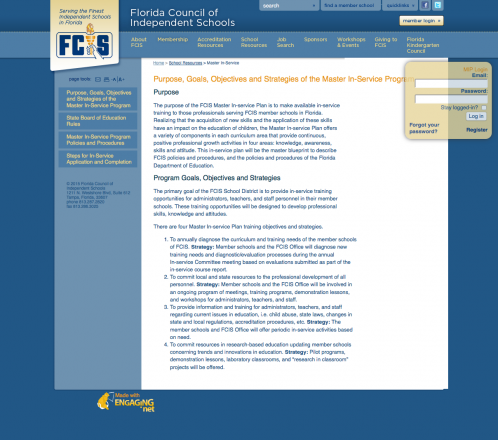 We started development at mip.fcis.org with a depopulated clone of CSF’s MIP system, repopulating it with FCIS’s member schools and their 160 educational components. Each component has its own PDF, but these had become so inconsistent over time that we regenerated them en masse from the system’s content, complete with watermark.

The system runs on ExpressionEngine, and we also modernized some EE methodologies, changing for example all Playa fields to EE’s new native Relationship field because it has namespacing.

Then we matched the look & feel to FCIS’s main site, hosted and powered by Finalsite, utilizing that site’s header, footer and font styles, adding only a floating navigation box personalized for each logged-in user; all in all the visitor would be hard-pressed to suspect she has left the main FCIS site. (One clue that we’re not in ColdFusion-land any more is more meaningful URLs, ie, http://mip.fcis.org/roles/mip-coordinator/madison-academy instead of, eg, http://www.fcis.org/page.cfm?p=6). FCIS staffers also have a menu to manage the over 3,500 users, log in as one of them via an ajax live search, produce reports, and jump to the ExpressionEngine cpanel.

Launch in August 2014, the system uses roles and positions, the method already proven over at the CSF site to handle enterprise-level complexity, so is ready for expansion into other areas of FCIS’s activities whenever the organization chooses to do so. As Keara emailed a few weeks after launch: “Everyone loves the system. It is easy to use and very efficient!”